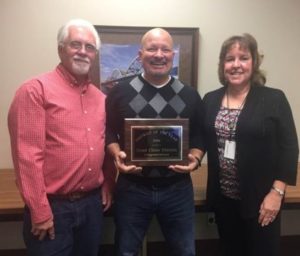 District of the Year. The competition among our districts was stiff this year, but the Quad Cities team shined.” Districts are scored on four key performance indicators that determine which district takes home the award. She added, “The Quad Cities team did an amazing job this past year.”

In addition to District of the Year, Quad Cities Team Member, Christine Bragg, was recognized as FBG’s Employee of the Year. Gogetap and Vice President Jim Simmonds select the one FBG Cleaning Specialist who conveys the core qualities of FBG’s “Build Pride,” mantra and who makes a positive impact on the environments and the people they serve. Gogetap said, “As always, we had an excellent group of nominees; however, Christine stood out as someone who consistently exudes our values and looks to do what’s right for the customers she serves.” 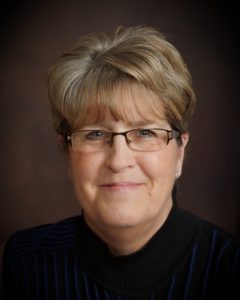 FBG 2017 Employee of the Year, Christine Bragg, who works in the Taylor Ridge Elementary School District.

Bragg was raised in the Rockridge community and attended Taylor Ridge Elementary where she now works. When FBG became the custodial service in 2013, Bragg stayed at Taylor Ridge to continue her 20 years of service to the school and its 131-student body. She considers the people at the school part of her family and is deeply loyal to it.

Quad Cities District Director Scott Hess, said, “Christine’s principal, teachers, students and coworkers just love her, and she is absolutely deserving of this recognition. We are so lucky to have her as a part of our FBG family.”

He continued, “We have an amazing group of District Directors, Managers, Supervisors and Team Members throughout the United States, which we’re very fortunate to be a part of. I must say that we wouldn’t have reached this level without the collaboration, training, guidance, leadership and support we get from our Omaha family. We have so many talented Employee Owners at FBG who are always working to make us better!”