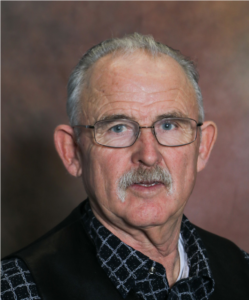 Program Manager Hillary Scott, says, “Ken is a vital cog at Western Nebraska Community College. I appreciate all he does. He demonstrates how FBG embraces their customers.”

Ken exemplifies employee owner commitment, and has even sacrificed scheduled time-off to cover shifts for others. When the college has events or games he is always the first one there to set up and the last one there to secure the facility. After a heavy rain, it is not uncommon to find Ken on campus on a non-work day, surveying known areas of concern.

Ken is a dedicated learner and he wants to set a good example for others. He’s attended both Revela Supervision and Diversey Building Service Contractor training. He also enjoys the challenge of bringing on new business and getting the right people in place to make the transition as seamless as possible.

In addition to having retired from the railroad, he managed a gas station and served as the mechanic for nearly 25 years. After losing his wife in the 1980’s, Ken raised his three boys as a single father. He has also served as a volunteer fire captain for nearly 15 years.

Ken, you have much to be proud of and we are proud of you!