FBG provides commercial cleaning services to the Omaha Public Power District, an electric utility serving customers throughout Eastern Nebraska. Recently, we spoke with several of their leaders and learned about their exciting cultural transformation.

Photo Courtesy of OPPD’s The Wire

The monarch butterfly species is rapidly declining. In fact, according to the U.S. Fish and Wildlife Service, about 970 million monarchs have disappeared over the last three decades. The monarch may become an endangered species.

Why does their existence matter? Butterflies act as a pollinator and food source for other species and are an important connector in a thriving ecosystem.

Thanks to OPPD’s Prairies in Progress project, things are looking up for the monarch. In 2017, Jim Fitzsimmons, Supervisor of Facilities Operations & Maintenance, was looking at site standards and cost reduction strategies, when OPPD was approached by the Save Our Monarchs Foundation about partnering. The foundation works with utilities who are turning acres of land restoration projects into monarch refuges. Adopting these methods reduces costs and promotes biodiversity.

For OPPD, one of the advantages of the project is fiscal. The prairies don’t require as much mowing, which saves money for ratepayers. According to Emily Muth, Environmental Affairs Administrator at OPPD, “It requires a good amount of labor up front, but it is a sound, long term management plan once the prairie is established.” It’s also an educational opportunity – so they have installed “Prairie in Progress” signage to let people know these areas are not being ignored, but rather cultivated. “OPPD is readying nearly 260 acres for pollinating within the next year,” said Fitzimmons. 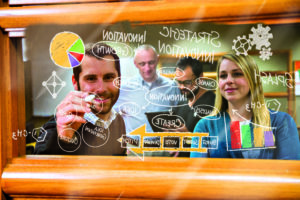 OPPD launched its inaugural Innovation Team in 2016 when two of OPPD’s Young Professionals, Courtney Polk and Matt Hardebeck, saw a need to develop a formal process for new ideas to be considered. They pitched the concept to OPPD CEO Tim Burke and the Innovation Team was born.

“The industry is undergoing a transformation, and we need to think about how to do things differently,” said Burke. “There is no better way to do that than engage the people that do the work every single day.”

“Moving fast can be hard for large enterprises, but our industry has changed and not just with products and services but in our supply chain and human capital,” Hardebeck said. “We’ve now reached a place where we are beginning to operationalize the change in mindset to an innovation-driven organization.”

The results are amazing and reflected in the culture at OPPD. The team has developed a formal process for consideration of employees’ innovative ideas. They have implemented innovation ‘bursts’ to source ideas from employees. Top voted ideas move into a six week development phase then are pitched to the top brass. One 30+ year field operations employee found a way to increase reliability, limit customer outage and it resulted in cost savings.

Innovation is now one of OPPD’s strategic initiatives as well as a department with full-time positions and with Hardebeck as the leader.

“We started something special in 2016, and the organization will never be the same,” Burke said. “Whatever changes occur from the initial structure proposed by Matt and Courtney in 2015, the focus will remain the same – to cultivate innovative ideas into solutions that address a changing utility landscape and help OPPD lead the way we power the future.